The effects of music on working memory among older adults: Literature review

The effects of music on working memory among older adults: Literature review

The population of elderly people is increasing all over the world and also the difficulty involving of mental health is rising in aging [1]. It is anticipated that the population of older adults (above the age of 60) reach 2.1 billion in 2050. Aging is associated with age-related changes in function of various parts of the body such as cognitive system that lead to limited social activity, lonely and physically weak [2,3], so our mission must be to study about effective prevention and treatment protocol in order to create good living conditions and increase of independence in old age [4-6].

One of the important complaints in aging population linked to loss of memory and substantial part of difficulties in memory system attributed to working memory (WM) that its function change with aging [7,8]. WM decline is component of the normal aging process and it happens in healthy older adults, so not related to presence or absence of neurologic disorder [9,10]. However those of elderly with WM decrease are at the risk of developing neurodegenerative disorder such as mild cognitive impairment (MCI) and Alzheimer disease [11,12]. Although the decline of WM in healthy older adults has negative effects on life performance and can cause increase of dependence but these effects are far greater on elderly with neurodegenerative disease [13,14].

The aim of this study is to highlight the importance of the WM role in daily activity among elderly and consider the optimal approach to reduce the effects of WM capacity decline in aging.

Of 288 primary articles, 103 potentially eligible articles were reviewed. Articles included in this review were identified through searching the databases of PubMed, Medline, Scopus, Google Scholar and Scientific Information Database using the search terms of music, working memory, aging and central auditory processing disorder. We considered the factors related to working memory, such as aging. The literature search was restricted to the years 1981 to 2020 and the English language. Figure 1 shows the Preferred Reporting Items for Systematic Reviews and Meta-Analyses (PRISMA) flowchart of study selection. 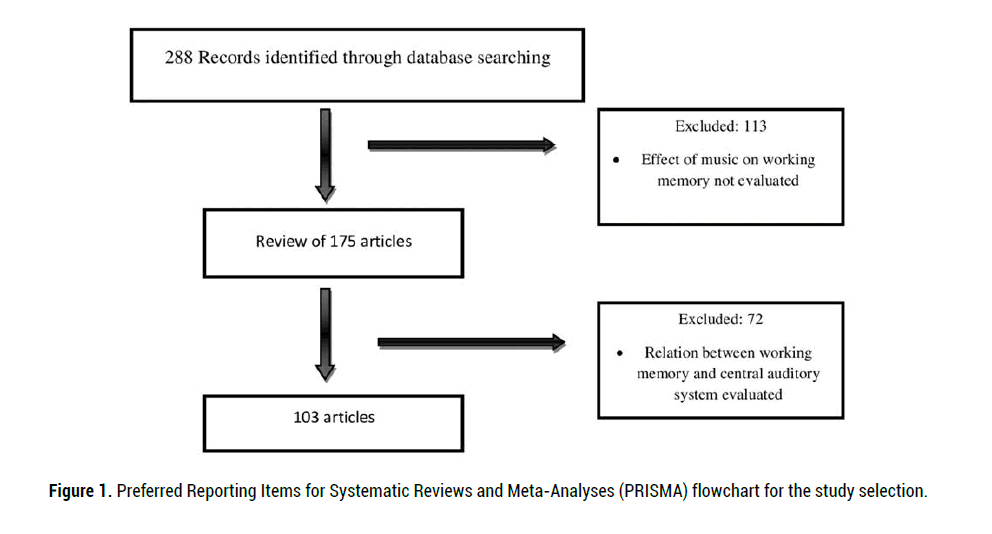 Many parts of the brain proportionally activated for working memory execution [15]. Various skills are necessary for the WM performance such as attention, sort-term memory and utilization of verbal and auditory information. This information maintained in WM for phonological representation of language so WM is fundamental for convey of information (word, letter and number.) [16]. Among the skills that required for WM performance, attention has great importance and age-related WM decline has been related to impairment of selective attention [17]. By definition, selective attention is the process to concentrate on target message while ignoring untargeted message. Selective attention guides our awareness toward the task and keeping the information in WM [18].

Several studies have shown that WM linear decreases with age [33-37] and this decline essentially related to impairment of processing ability [38]. In other word WM decrease along with other cognitive mechanisms such as processing speed in aging [39-41]. Information manipulation is more agesensitive than information maintenance [42].

Older adults with limited WM capacity exposed to great volume of linguistic materials, this situation probably lead to impairment of cognitive process and difficulty with perception of complex sentences [43,44].

Age-related changes begin in some components of the brain that played role during WM performance [46]. These changes affect function and structure of the brain, however the exact mechanisms of these changes are unknown, but gradually decline of neural cell begins in prefrontal (in particular, dorsolateral prefrontal cortex) and parietal regions [47-51]. Each one of these regions has particular role in WM, the frontal regions at the monitoring situation, the parietal regions at the utilization of information and white matter structures in prefrontal cortex linked to processing speed [52, 53]. So, impairment of WM leads to difficulties in manipulating information [16,54].

Speech-in-noise (SIN) perception seems to rely on WM, since the fundamental task of WM is discriminating between target message (speech) and untargeted message (noise) and also larger WM capacity with involved of active attention mechanism lead to better speech perception in noisy situation, So WM decline lead to SIN perception faces the challenge in aging [73-76]. Ignoring the untargeted message manages by inhibitory mechanism of WM and this mechanism delayed in time in older adults [77,78].

In other hand, this time delay is due to age-depended changes that happen in frontal cortex, particularly the prefrontal cortex [79,80]. Decrease in white matter may effect on neural tracts that is associated with declined neural conduction and processing speed [81,82].

In difficult auditory situation whether due to hearing loss or distracting message, verbal WM has an important role because we become dependent to visual information related to speech for better speech perception in this situation [84-85].

The age-related hearing loss (presbycusis) that attributed to the peripheral auditory system impairment lead to decline of hearing thresholds [88-90], but in the central auditory impairment that is known as central auditory processing disorder (CAPD) the hearing thresholds are normal but there is a difficulty in speech perception especially under complicated listening position such as noisy environments. The SIN perception skill related to the central auditory system [91]. Cognitive process is very essential for speech perception especially when listening situation exposed to noise or any other competing message [92-93] because noise or any unwanted sound can impair your memorization skills and also WM performance. There is a great link between attention and executive function component of WM and CAPD, so that individuals with CAPD often diagnosed with impairment of attention and executive functioning of WM Figure 2.

Figure 2: Relation between central executive segment of WM and CAPD.

Many cognitive functions including working memory impaired in Alzheimer's disease (AD) and cognitive impairment apparent in the early stage of AD [94]. The Center for Disease Control has reported that AD is the sixth main reason of death in the United States among people above the age of 65 years.

The evidences demonstrated that cognitive abilities are impacted by music [95,96]. Listening to music affects our behavior, activities and emotional state. Music has positive effects on mood and communication all over the life especially during aging. The effects of music on memory tasks related to its effects on mood, psychic and emotion. One of the destructive processes in neurodegenerative disease that involved memory such as Alzheimer's disease is atrophy and decrease in number of neurons in the brain areas especially in the hippocampus. One study showed that music has the positive effects on short term memory in the autistic rat pups [97]. Functional magnetic resonance imaging (fMRI) showed that Cognitive training increased activity in the prefrontal and parietal [98]. Studies have shown that WM training progress the rate of processing and some skills of the central auditory processing such as attention, language perception and cognitive control [99].

Classical music has positive effect on spatial reasoning. However individual variables such as mood, the arousal level and musical interest strongly linked with effects of music [100]. Music has indirect effect on learning and cognitive functions by influence on mood, emotional state and arousal. Cheerful and sweet music that person prefer to listen lead to better cognitive functions [101]. Music is a complex acoustic stimulus with features such as melody, timbre and perception of music is associated with syntactic and semantic processing, attention and working memory. Listen to the music entertain most parts of the brain such as frontal, Temporal, cerebellar, parietal and limbic/ paralimbic [102]. Any functions related to music whether listening or singing can contribute to decrease of stress through increase of social activity and welfare among older adults [103].

F.B contributed to the design and implementation of the research, to the analysis of the results and to the writing of the manuscript.

The author declares no potential conflict of interest on publishing this paper.

The author received no financial support for the research.