Introduction: Multiple sclerosis (MS) is an inflammatory disease which disrupts the ability of nervous system to communicate, resulting in a wide range of signs and symptoms including physical, cognitive and psychiatric. Cognitive dysfunction is increasingly recognized as a critical factor in the quality of life of patients with MS. Remission of cognitive symptoms is uncommon, and cognitive decline may indicate progressive disease despite stable physical symptoms.

Methods: A total of 30 patients of MS diagnosed by modified Mc Donald criterion 2010 had undergone MACFINS battery of Cognitive testing twice, first at the time of initial recruitement and then after a period of 6 months.

Results: No significant cognitive decline was observed in patients after a mean follow up of 11 months. There was mild but not significant impairment in EDSS. There appears a strong direct correlation between all neuropsychological tests and physical disability. Most significant correlation of EDSS is seen with PASAT (P=0.002), BVMT1(P= 0.008), BVMT2(P=0.007), COWAT(P=0.0002) and Stroop B(P=0.009).

Multiple sclerosis (MS) is a chronic disease involving central nervous system (CNS). Its pathological hallmarks are neuroinflammation, and demyelination, neurodegenration and astrogliosis. This damage disrupts the ability of parts of the nervous system to communicate, resulting in a wide range of signs and symptoms including physical, mental, and sometimes psychiatric problems [1-3]. Cognitive impairment has been recognised as an important feature of MS over last two decade that affects up to 65% of patients4. Remission of cognitive symptoms is uncommon, and cognitive decline may indicate progressive disease despite stable physical symptoms [4-6]. Impaired cognitive function may reflect damage to brain regions that do not affect physical functioning and, therefore, may not be detected during routine neurological assessment. Only a few cognitive tests have been validated in MS populations.Consequently, cognitive impairment is probably under diagnosed in MS. It is essential; therefore that cognitive function is assessed as a part of Quality of life (QoL) studies of MS patients. This study included patients of MS with EDSS score range 1-7 and their cognitive performance was studied over 6 months to 1 year.

A total of thirty MS patients who attended Neurology department of Army Hospital Research and Refferral between March 2012 and December 2013 consigned study subjects All patients meeting the modified Mc Donald criterion for multiple sclerosis 2010, including those having clinically isolated syndrome were included for the study irrespective of type of MS. They were enrolled in this study after an informed consent and were re-evaluated for the diagnosis and type of MS duration of disease, frequency of relapse, and nature of physical disability using the EDSS score. Cognitive testing was conducted on patients twice, first at the time of initial registration and then after minimum of 6 months and their cognitive decline was studied. Correlation of cognitive decline with EDSS was also studied. All these patients were under disease modifying therapy except one patient.

Those patients with severe depression, severe visual/motor deficit, and history of substance abuse, history of head injury or other nervous system disorder and history of psychoactive disturbance were excluded.

Cognitive dysfunction was assessed using the minimal assessment of cognitive function in MS (MACFIMS) score [7]. The MACFIMS battery includes the

It is a test of working memory with substantial demands on processing speed is a sensitive measure of cognitive dysfunction in MS and has a sensitivity and specificity of 74% and 65% respectively. The PASAT requires the patient to listen to a string of auditory digits and continuously adds up the last two heard.

Used to assess divided attention, visual scanning, tracking and motor speed. The patient is presented with nine graphical symbols, each paired with a single digit, serving as a key. Below are rows of symbols that are randomly ordered and the patient must say right number to score the marks.

Measures the special perception and orientation. In this test there are labeled array of lines drawn at 18 degree interval from one another and are labeled from 1 to 11. The respondent is required to identify the lines and number them.

In this test the examinee is asked to say words that begin with letters starting from F,A,S. It is the measure of fluent productivity in verbal domain.

It is used to assess visual learning and memory using a multiple trial list paradigm. It consists of three learning trials with exposure to stimuli lasting 10sec and 20-25 min delay recall condition. It requires the individual to accurately retrieve six unique designs as well as recall their correct location on the page.

Patient has to scan the numbers and connect the numbers in an ascending order in 1ststep, thereafter he has to connect numbers and alphabets sequentially as fast as possible. It assesses attention, visual scanning, number sequencing, number and letter switching and the motor speed.

Measures the attention and response inhibition. The examinee names colour patches, names the ink colour in which colour words are printed and switches back and forth between naming the dissonant ink colour and reading the conflicting words. It assesses the inhibition of an over learned response and flexibility.

Examinee is asked to sort 6 cards into two groups according to as many rules as possible. It is a test of problem solving and concept formation

Patient is assessed for abstract thinking. The examinee has to interpret proverbs orally (free inquiry) and select the best interpretation from alternatives (multiple choice)

Since the cut offs for these neuropsychological tests do not exist, the scores of the patients were compared with that of controls chosen from healthy individuals. The 95th percentile of the scores of the patients was calculated and the patients scoring below this limit were labeled as impaired for that test. Patients were categorized in various groups - who failed 0-2 tests were considered cognitively preserved, those who failed 3-5 tests mildly impaired and those who failed more than 5 tests moderately impaired. Statistical analysis was carried out using R version 2.11.1 (the R foundation for statistical computing). Data was presented as number (%) or mean ± SD / median (minimum – maximum) as appropriate. Neuropsychological tests variable measured at baseline and after 6 months were categorized using 95th centile values derived from control subjects “respective neuropsychological tests variables”. The change in raw neuropsychological scores from baseline were tested using Paired T test .The shift in frequency of >95th centile or ≤ 95th centile from baseline for each of neuropsychological testsvariable were tested using McNemer’s chi square test. The change in cognitive impairment scores at 6 months from baseline were tested using Paired T test. The cognitive impairment at 6 months (mild & moderate) were compared with educational qualification , employment status , type of MS using Fisher’s test and EDSS and disease duration were compared using Wilcoxon ranksum test. The changes in EDSS at 6 months were assessed using Pearson correlation coefficient. Pvalue <0.05 was considered statistically significant.

The population consisted of patients from different cultural, ethnic and socioeconomic background. Seventy persent of patients were females. The female: Male ratio in the study group was 2.3:1

Unemployed, most of these patients were housewives. Three of our patients were students. Seventy percent of patients were of RRM, 26.7% were of SPMS and only one patient belonged to CIS form of disease.

EDSS is taken as the index of disability in MS. Physical disability varied markedly in this study. Mean EDSS was 3.15 at initial evaluation. 96% of patients were on disease modifying therapy; only one patient refused to take treatment but had no relapse for the last 3 years. Six of the thirty were on natalizumab, one on rebiff and the majority of patients were on Avonex. Almost all patients tolerated the treatment and had good compliance.The mean duration of disease in the study population was 8.6 years (Figure 1).

At the initial evaluation the cognitive impairment among the patients in various neuropsychological tests showed that working memory, visual-spatial orientation, visual memory, processing speed, verbal fluency and abstract thinking were more affected in MS patients. It was seen that clueing during test help patients to perform better as patients scored better in BVMT R, PROVERB B. Executive function and set shifting were relatively preserved. All patients were followed up for the mean period of 11.0 months (Figure 2). 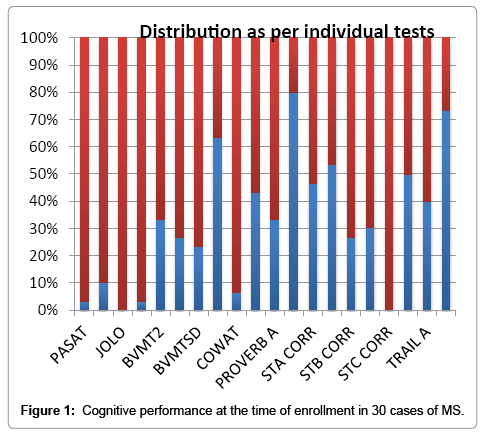 Figure 1: Cognitive performance at the time of enrollment in 30 cases of MS. 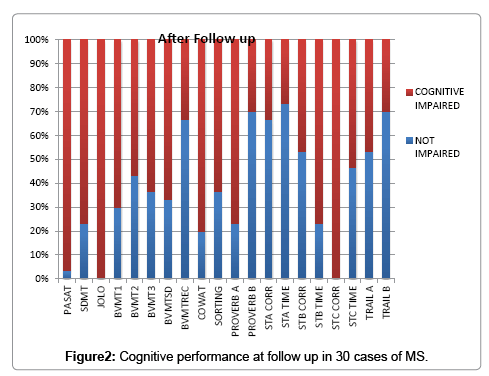 Figure 2: Cognitive performance at follow up in 30 cases of MS.

Table 1: Mean test scores in 30 patients of MS at the time of enrollment and after follow up.

Table 2: Comparison of cognitive change and EDSS before and after follow up.

Correlation of Edss with the Cognitive Decline

In other words if the patients disability increases then there is proportionate decrease in its performance in the neuropsychological tests.

Multiple Sclerosis was believed to be rare in India earlier. The calculations based on the hospital data suggest an approximate prevalence rate of 0.17 to 1.33 per 100,000 of population in different parts of India in 1985 by Sing Hal et al. [8]. Jain et al. [9] reported 4.15 new cases per year from north India while the figure from south India was 3.2.

The prevalence of cognitive dysfunction in our study was 100%, as this study was conducted in tertiary care center, it may not represent the true sample of community. It is possible that prevalence of cognitive dysfunction in community is lower. All the patients (100%) had moderate impairment at the onset of study meaning that they had failed in more than 5 tests during the initial evaluation.

In this study we have used MACFIMS battery (gold standard) of neuropsychological tests which is comprehensive and it evaluates the most of the cognitive domains .The main drawback of this neuropsychological testing is that it is time consuming and patients gets mentally fatigued during conduction of these tests.

In our study working memory, visuospatial processing, and visual memory, processing speed, verbal fluency, and abstract thinking were relatively affected to greater extent than other modalities. It was seen that clueing during the tests helped patients to perform better suggestive of subcortical dementia. Executive dysfunction was seen in lesser number of patients. These findings are consistent with the studies conducted by Rao et al. [12] and Benedict et al. [7].

While comparing the results of initial evaluation on cognitive impairment, it was seen that three patients had shown slight improvement in their cognition although they remained cognitively impaired. Actually, in the retest, a slight tendency towards improvement was observed on most neuropsychological measures although no change was statistically significant. One explanation of this may be that the preserved patients could not perform maximally in the lengthy initial neuropsychological assessment and were less fatigued and more able to exploit their cognitive resources during the briefer follow-up examination. Another possibility is that some patients had learned to use cognitive strategies and, therefore, were able to show a slight performance improvement.. This study failed to show significant cognitive decline in patients of MS because of heterogeneity in the disease course and the potential influence of disease subtype and short duration of follow up. Our results amplify the published evidence of Filley et al. [13], Jennekens-Schinkel et al. [14], and Marini et al. [15]. Who have also reported longitudinal cognitive preservation in multiple sclerosis?

In summarizing evidence from this cohort study, we can conclude that MS-related cognitive dysfunction is highly prevalent though it occurs slowly and less consistently. Cognitive deficit is present in all subtypes of MS even in CIS. All modalities of cognition are affected in MS. Once cognitive dysfunction occurs, it is unlikely to remit to any significant extent, although it may remain stable.The putative influence of disease-modifying therapies on cognitive functions in MS patients remains elusive. EDSS have significant correlation with the performance of patients in the neuropsychological tests.

Copyright: © 2015 Rima R. This is an open-access article distributed under the terms of the Creative Commons Attribution License, which permits unrestricted use, distribution, and reproduction in any medium, provided the original author and source are credited.