Oral Squamous Cell Carcinoma (OSCC) is a common malignant head and neck tumor. The mainstay treatment of OSCC is surgery-centered multimodality therapy. Reconstructive surgery is always needed to restore the oral function after ablative surgery. Role of NACT in the treatment of head and neck cancers is still controversial. In this study, we retrospectively reviewed a group of patients with locally advanced but resectable OSCC in a single cancer center. A total of 32 patients who received NACT followed by surgery and 35 patients who underwent surgery without NACT were included in this study. No statistically significant result noted within demographic characteristics, pathology differentiation, site except buccal mucosa (p value=0.04), clinical T4a stage, N stage, positive surgical margins, mandibular preservation rate, skin and RMT involvement and facial edema. 12 out of 32 (37.5%) patients who received NACT were good responders including two patients (6.2%) had a Complete Response (CR) and 20 patients (62.5%) had a PR. NACT doesnâ€™t influence on choice of surgery because all patients had undergone radical surgery. Kaplanâ €“Meier analysis showed no statistical difference between two groups (p-value: 0.159) with no difference in hazard function, which remain 1.00 at 1-yr. Patients in the non-NACT group had a statistically better RFS (median 11 months with 95% CI 9.17-12.82) than the patients in the NACT group (median 8 months at 95% CI 6.42-9.57). So, if OCSCC is resectable than resect primarily.

Following the advances in imaging and therapies, the prognosis of patients with OSCC has improved, with its 5-year survival rate arriving at about 70% recently [1].

Neoadjuvant Chemotherapy (NACT) refers to chemotherapy administered before surgery. Its role in the treatment of head and neck cancers is still controversial [2]. Two main concerns for the application of systemic therapy are the improvement of long-term survival and organ/ function preservation. Induction chemotherapy (before radiotherapy) was firstly started in laryngeal cancer in order to select appropriate patients for organ preservation therapy. Then, questions were asked whether an addition of chemotherapy before surgery or radiotherapy could improve survival. The answers were still not clear even after a lot of studies including randomized clinical trials and meta-analysis [3-5].

In addition, there are still few studies investigating the influence of NACT on the following surgery. Can we perform a limited surgery after NACT? Will it affect the surgical margins and prognosis? In this study, we retrospectively reviewed a group of patients with locally advanced but resectable OSCC in a single cancer center.

This was a retrospective and observational study. The study was approved by the institutional review board at Sri Aurobindo Institute of Medical Science, Indore. Written informed consent was obtained from all patients at their first visit. We comprehensively reviewed the clinical records of OSCC patients who were treated in our institute during October 2018 to June 2020.

Finally, a total of 32 patients who received NACT followed by surgery and 35 patients who underwent surgery without NACT were included in this study.

• T4b including only low ITF or masticator space involvement

Staging workup included indirect laryngoscopy, tumor biopsy, and computed tomographic imaging. The site and extent of the tumors were evaluated by clinical examination and imaging scans.

Neoadjuvant chemotherapy: The patients in the NACT group received two-three cycles of preoperative NACT. TPF regimen (docetaxel 60 mg/m2 intravenously on day 1, followed by cisplatin 75 mg/m2 intravenously on day 1, followed by fluorouracil 750 mg/m2 per day as a 120-hr continuous intravenous infusion on days 1 through 5) was administered every 3 weeks. Supportive measures including dexamethasone, antiemetics, and hydration/diuretics were also administered. Primary prophylaxis with recombinant granulocyte colony-stimulating factor was prescribed 48 hrs after the chemotherapy. Chemotherapy dose reductions were allowed for grade 3–4 hematologic, GI or renal toxicities occurring after cycle one. Another regimen is 5-FU and Cisplatin only.

Surgery: Radical surgery with flap reconstruction done in almost all groups of patients. In the non-NACT group, upfront radical surgery was performed. Neck dissection and flap reconstruction were also done. In the NACT group, the choice of conservative or radical surgery is not merely determined by the response of NACT. Multiple aspects patient’s clinical manifestations were also considered, such as primary site of tumor, pathology differentiation, T and N stages, and shape of tumor. Surgery was performed at least 3 weeks after completion of NACT. The surgical extent is partly determined by the response after NACT. For radical surgery with flap reconstruction, wide excision of the primary lesion with 1-cm surgical margin and neck dissection were performed. Microvascular free flap or pedicled pectoralis major flap were used to reconstruct the defects after the surgery.

Postoperative radiotherapy: Adjuvant treatment after surgical extirpation was determined on the basis of standard PORT criteria, including extracapsular spread, positive margins, regional metastasis, and perineural and lympho-vascular invasion. Postoperative radiotherapy was initiated within 4–6 weeks after surgery for the patients with adverse features. Standard conformal or intensity-modulated radiotherapy was administered at a dose of 2 Gy per day, 5 days per week, for 6 weeks (60 Gy in total). Concurrent cisplatin given according to high-risk features in HPE report.

Assessments: The stage of OSCC was evaluated according to the UICC TNM (8th edition). Clinical tumor response was evaluated 3 weeks after NACT by physical examination and imaging scan. The standard World Health Organization (WHO) RECIST1.1 criteria were used to evaluate the response after NACT. Patients with a response of at least 50% (more than partial response, PR) were classified as good responders. Toxicities were assessed weekly during and after completion of NACT according to Common Terminology Criteria for Adverse Events (CTCAE, version 4.0). Surgical margins were evaluated pathologically by post-operative HE staining section.

Follow-up and outcomes: All the patients were followed up for at least 5 years, monitored every 1 month during the first year every 3 months in second year and every 6 months during the subsequent 3–5 years, and once per year thereafter until death. The primary outcomes of interest were Disease-Specific Survival (DSS), Disease-Free Survival (DFS). DSS was defined as the time from treatment to the time of death from OSCC.

Statistical analysis: For descriptive analysis, categorical data were expressed as number and percentage. The baseline data in the two subgroups were compared by the Chi-square test to assess differences among the clinical variables. The Kaplan–Meier method and the log-rank test were used to assess differences in the survival between different treatment subgroups. IBM SPSS statistics software was used to perform the statistical analysis. A two-tailed P<0.05 was considered statistically significant.

Table 1. The baseline data of the two groups.

RFS between NACT and non-NACT group 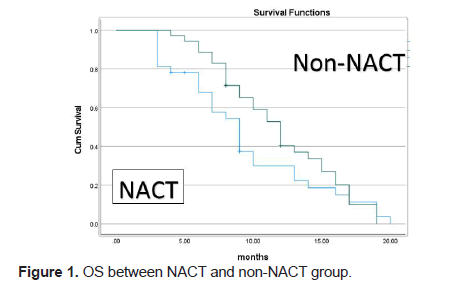 12 out of 32 (37.5%) patients who received NACT were good responders including two patients (6.2%) had a Complete Response (CR) and 20 patients (62.5%) had a PR. Kaplan–Meier analysis showed no statistical difference between two groups (p-value: 0.159) with no difference in hazard function, which remain 1.00 at 1-yr. The survival curves are shown in Figure 2. 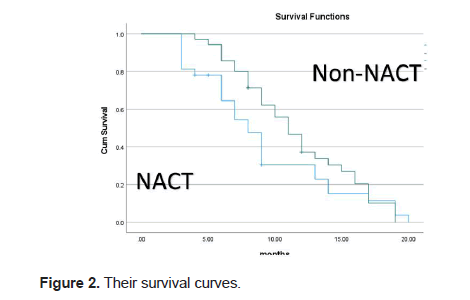 Influence of NACT on the following surgery

Among 32 patients received NACT, all patients (100%) had radical surgery with flap reconstruction. A choice of conservative or radical surgery is not merely determined by the response of NACT. Multiple aspects patient’s clinical manifestations as suggested in Table 1 were also considered, such as primary site, pathology differentiation, T stage, and N stage. We compared the surgical margins between the patients received NACT or not. None of the patients had positive surgical margins. So, no statistical difference between the two types of surgery (P=1.0) (Figure 3). 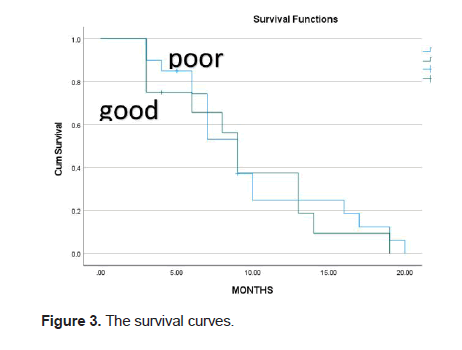 Standard of care in oral cavity cancer is primary surgery followed by adjuvant therapy if required in the form of RT/RT+CT [4].

Neoadjuvant chemotherapy means that administration of chemotherapy before definitive therapy which either may be surgery or RT or RT+CT.

There are various advantages of neoadjuvant therapy which are:

3. Has an established role in organ preservation strategies

4. No compromise of subsequent surgery or RT

5. Is an early systemic treatment for occult disease

After 11.5 yrs of follow-up of above study, Bossi et al. suggested that no difference in OS and DFS, loco-regional and distant metastasis relapse at 10 yrs. But in patients with pathological CR have better survival than no pCR (76.2% vs. 41.3%) [10].

A study by Zhong et al. in which TPF 2 cycles used, no difference in OS and DFS but in subgroup analysis some survival benefit seen in clinical N2 group of patients [11].

So, multiple studies fail to demonstrate improvement in LRC or OS with NACT. But some benefits are 1. Mandibular preservation in tumours without gross invasion of mandible, 2. Reduction in use of post-op RT, 3. Disease control in patients with higher nodal stage, 4. Prognosticate patients based on response.

In unresectable OCSCC as defined by Patil et al. as buccal mucosa cancer with peritumoral oedema reaching up to zygoma, tongue primary reaching up to hyoid bone, extension of tumour in high ITF and extensive skin infiltration impacting achievement of negative margins [12].

Meta-analysis of 4 main studies for unresectable OCSCC showed no benefit in OS and PFS [15-17].

NACT which containing 3 drugs regimens have gain popularity recently in locally advanced OCSCC. In our study, it doesn’t made difference in margin positivity after surgery, difference in survival between good and poor responders. According to site, it makes some difference in buccal mucosa cancer with ill-defined oedema at cheek skin. In Non-NACT group, 3 months survival benefit in OS and RFS, this is statistically significant. So, if OCSCC is resectable than resect primarily. If unresectable than we have to determine if it will resectable after NACT than role of NACT is there. But, if not possible after it than patient is candidate for CTRT.

Copyright: © 2021 Patel D, et al. This is an open-access article distributed under the terms of the Creative Commons Attribution License, which permits unrestricted use, distribution, and reproduction in any medium, provided the original author and source are credited.